Day 5: Water Truck and Home for Sick and Dying Babies

(Kenzie)  The day began with our second and final water truck day in district 17 of Cite Soleil. As the Tap Tap crossed into Hope church, the line of children quickly formed at the gate. New and familiar faces met by the water truck for a day of laughter, hard work, and true faith. While helping to deliver water buckets to individuals homes, I heard my name shouted across the street. The moment I turned around, I saw the face of a young boy I had met earlier in the week and quickly felt a connection with. He was holding up his hands in the shape of a heart, which I taught him how to do on our first water truck day. My face immediately lit up, and my heart was overflowing. He clung to my side the remainder of the stop and followed the Tap Tap to our second water stop, Four Coffins in Cite Soleil. 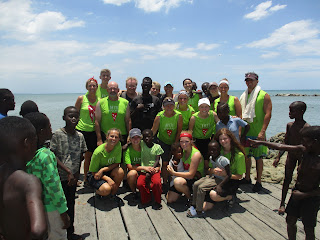 (Sydney) When we arrived at the second stop we opened the door to that Tap Tap to see a crowd of children. As I looked out I heard my name, it was from a little girl also named Sydney that I had met at our first stop of the day. We became so close at the first stop and I was heartbroken to say goodbye  so when I saw her at the second stop I was overjoyed. We spent the entire time together, I would hold her, and she would play with my hair. Unfortunately our time together came to an end. I carried her to the Tap Tap and gave her a huge hug. I started to hear her cry which brought tears to my eyes. We spent a few minute saying our goodbyes until she finally pushed me into the Tap Tap. As we drove away she followed the truck blowing me kisses and looking at me with tears in her eyes until we became too fast for her and she got on her knees, covered her face, and cried. I will never forget her smile and how much she meant to me and I hope she doesn't forget me as well. 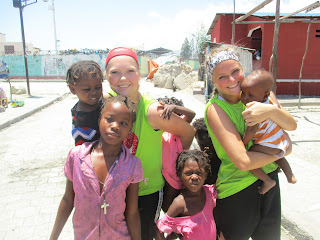 As our time in Haiti progresses, I continue to learn the true depth that touch contains. When arriving to Mother Teresa's Home for Sick and Dying Babies, seeing the rows and rows of cribs was a heart breaker, yet only fueled the desire to serve and present the touch from all our hearts to those beautiful children. We helped feed the babies and played with them on the playground on the patio. Once our time had ended and we had to set the babies back down in their cribs, it was very difficult to walk away... but all throughout this trip we have learned to truly embrace the connections we make in our small time spent with them to continuously learn and better yourself through hope and faith. 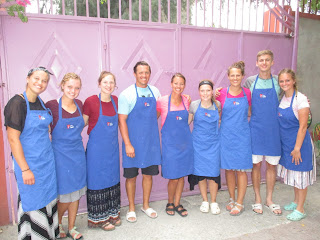 Posted by Healing Haiti Mission Team at 5:12 PM No comments: