We had an interesting day from the very start. We had one of our team, who has had steady headaches from the first service time on Water Truck day. She was prayed for last night before bed and the headache was gone. This morning it had returned and so we prayed as a team and she said she felt a bit better, then the same person prayed the headache was gone and she had a great day with no headache, and so her word of the day, which is the one word we use to describe what meant the most to us during the day, was dance:)

Today was our second water truck day, where we go and deliver water along with our water trucks, to the area known as Cite Soleil. Having done it on Tuesday, this was one thing, we knew what to expect, so we seemed more relaxed and it went great. People that had done the hose before, wanted to do it again, which will be something they won't likely ever forget. They are the person who actually holds this big 5 inch wide hose and pours/shoots water into this line of buckets, being shoved into place by eager, maybe somewhat desperately thirsty people. Water is life here, just as it is everywhere. So when you have no access to it, guess that's as important as anything. Well we deliver to them for free and then our team helps them carry the water, as Haitian culture mostly women and kids do that tough task. Although, this time we did notice more male involvement:) Those not hauling water are mobbed by kids wanting to be held, aching to be loved. It's really a remarkable thing, and the team said that they had heard from me what to expect, but there really isn't any way to be truly prepared for what the experience is actually like once you are here. At one stop it was actually difficult for us to get down the stairs cuz the kids were so eager they were climbing up to greet us:) It is my job to make sure our team doesn't stray too far, and also to get the best pics of their whole experience. It's a pleasure to try and capture their happy faces as they hold a child or 3, 4, or 5, I think was todays record by Sam:) But more than the pics, will be the memories of the feelings or moments that will change them forever, and brighten someone's life even if only for a moment.

After a quick turnaround to shower and eat, mostly standing, while we got ready for going to
La Pherre orphanage. This is a great experience, where the kids are seemingly happy and healthy and open to our loving them even if for just a few hours. We started with a familiar song with Molly doing great on keyboard and then Emanuel joined in on guitar, and we had a fun singalong time. Then Amida got her photo booth out:) and Noah and Brady took polaroids of the kids, some with big smiles, and poses, and some were being pretty shy. Sam and Amida were doing their best to keep it somehow orderly:) Once the polaroids developed they were put into small frames with the words "Jezi Remnen ou" which means Jesus loves you:)
While this was going on we got out the old favorites, Bubbles, and Jaimie and Laura and Jacob, entertained kids with that, and then the girls got excited as Marcia, Jen and Kristi brought out the nail polish and started getting the girls of all ages with beautiful colored nails:) At the same time outside in a small walled in courtyard, driveway type place, Jake was playing soccer with some of the boys, and then was joined by Jacob and Noah too! Talented kids, even the younger boys, were fun to watch!
Then we got the parachute out, thx soo much to Marcia for bringing it along, and started playing games with Marcia, Sam, Jaimie, Laura, Jen and Amida and ....really got the kids moving:) and smiling!! Before we left, we had the girls from La Pherre's putting on a jump rope display that impressed all!! and included a turn for Molly as well:) We all felt encouraged that there was such a well run place where the kids were being especially well taken care of.

Last special part of our day was a worship session on the balcony of Guest House 2, with Grace, our American long-term missionary leading some of our favorite contemporary Christian worship songs. We had all three Healing Haiti teams, come together as a group to raise our voices in praise to our Heavenly Father, through whom all things are possible, and through his love, we are able to do what without Him, we would not be equipped.

In the book of Romans, it talks about how God's love is poured into our hearts by the Holy Spirit, who He has given to each of us that believe. It's because of this gift that we are able to show such love and impact lives as we are serving each day here in Haiti. 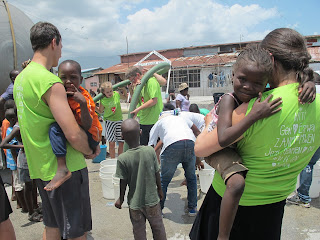 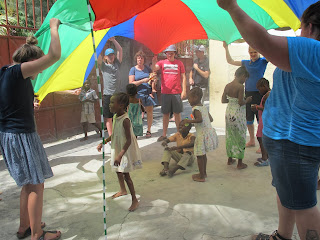 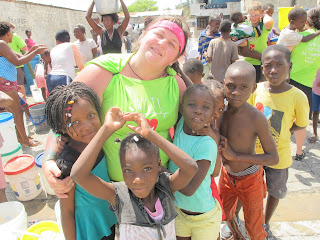