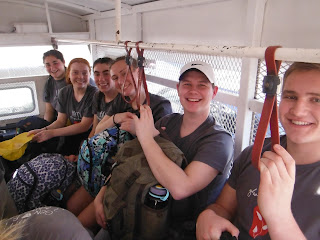 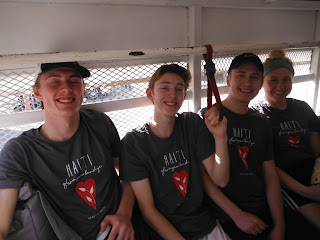 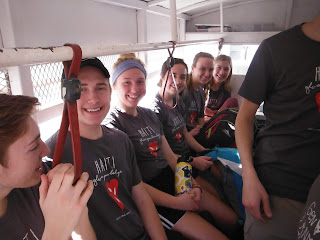 With the first ring of our 3 AM alarms, our journeys began. Though we did face the wrath of the TSA employees and an angry old flight attendant (who told us she has grandchildren, so she “gets” it), Ellie walking into the men’s bathroom, running through the terminal to make our flight, we managed to sprint through the airport with just a few minutes left to spare. While we were running, Grace’s water bottle broke and spilled all over the terminal floor.

Many of us napped, listened to music, watched movies, or played games on the airplane (including a large game of airplane bingo). After 2 hours and 30 minutes, we had arrived at the Haiti airport, with bright sun and Haitian music playing as we walked in. Boarding onto our “tap tap”, our little open air bus, many of us hit our heads from the sharp and crazy turns—there are no driving restrictions in Haiti! (Don’t worry, Laurie, Kate is safe.)

Once we arrived at the guest house (we got the best one… 5 bathrooms!), Healing Haiti workers and cute dogs greeted us. Within minutes of arriving, we played street soccer with the neighborhood boys and attracted a crowd of 30 people! All the teenagers were really happy to see us and were far superior in skills. Alani had a record high vertical and came out of nowhere to head the ball to our surprise! The Haitian boys played barefoot and our goalie, who was wearing jeans, was sliding all over the place saving soccer balls. Noah was chosen by the Haitian boys for his height and was picked as the other goalie. Everyone participated and it was a lot of fun! We had a really good spaghetti dinner and the Russian crew (Henry & Natalya) cleaned up the dishes while Kate gave us a beautiful rendition of Stairway to Heaven on the guitar along with Ellie playing the ukulele and Alani on the bongo drums and Eric was playing smoke on the water. Noah is sleeping while we write this.

P.S For the first time in a while, we will not be staying up to midnight for new years.

We can’t wait to update you guys more on our journey!

Love you and miss you guys! (Henry)

I miss you both already <3 (Grace)