Today was water truck day! At our second water stop, I met a few older kids around 10 years old.
The little ones were adorable and plenty, but there were also a lot of older kids who would love some attention.

I started playing hand clapping games with one girl, which turned into us slow dancing while she sang a beautiful song in Creole ... that led into her teaching me a dance with hand and body motions. We did this for the entire time I was there ... slow dance, fast dance and back to slow. People passed us by and smiled. Of course, a few kids tried to join us, which she was having nothing to do with ... she wanted me all to herself.  I wish we could have spent more time there since it was hard to leave my new friend.

I hugged her tightly and she followed me back to the tap-tap. I wasn't aware that she followed me until the interpreter told me.  She came around to the side of the tap-tap and held her hands up towards me as I held mine out to her (even though we couldn't reach each other).  She said something in Creole that I thought was my name. The interpreter said she was calling me beautiful. She was the beautiful one!! 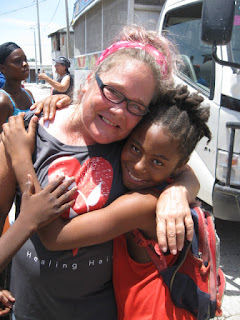 Today, we stopped in three different areas in the poorest slum of Haiti to help the people get clean water. I didn't know what to expect, but it certainly wasn't this. As soon as we began to step off the tap tap, the kids grabbed us, reached for us and loved us in any way they could. They smiled so beautifully and they each had so much admiration in their eyes. "This person will help me. This person will listen. Please, love me." ... that's what I could see in their eyes. I've never felt so much light in one place, and what a place to find it! They were fascinated by my curly, long hair. I witnessed children who are stronger than I will ever be. Children with swollen stomachs and bared ribs, carrying buckets of water on their heads. They had no shoes, and I could barely stand a minute in that heat without mine. They sang, danced and played games with us, but nothing could top the thankfulness in an elderly woman's face when someone would carry her water for her. The kids showed me various bracelets or rocks that they had, beaming with pride. My heart broke as we had to let the kids go and head to the next stop. They would watch us with tears in their eyes. "Orevwa." Goodbye. 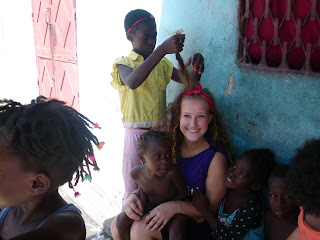 Posted by Healing Haiti Mission Team at 7:32 PM No comments: