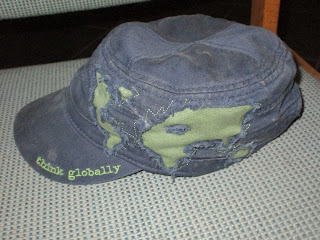 Shortly after we disembarked from the Tap Tap  he took my hand.  I sat down on a step with him where he began to play with my hand until I stopped him... after realizing that he was intentionally pushing down all of the fingers of my right hand except my middle one.  He then climbed the steps behind me and asked me to watch him.  He proceeded to go down the steps hands first. Then he took my hat and put it on his head...and ran away with it.  Attention seeking, Mischievous.  Testing me, pushing me for a reaction.  I got the hat back, returned reluctantly.  As our tour of Grace Village progressed, I watched him "steal" two more hats off heads of other mission volunteers, scale a fence that I was pretty sure was off limits, eat cookie dough from the bowl in the kitchen, and flirt with the pretty, young volunteers.  He refused to stay in the background, in the shadows, determined and demanding to be seen, to be heard, to be noticed.  So, I noticed, and I wanted him to know that God notices, too, all day every day, all the time, with a fierce, relentless, Fatherly love.  Was he being naughty?  Some would say so.  I later found out his name and his attention seeking antics were well known to those familiar with this place.  Before I left, he hung out on the couch next to me.  I gave him a hug wishing I had the time to get to know him better.  But, I pray, that in this place of refuge and redemption and restoration. in the hills above the village named Titanyen, translated as Less Than Nothing,  he will know that he meant something to me today.  More importantly, that he will know deep in his heart that God pays attention to his children, to him, this precious precocious child
and loves him deeply, all day, every day, all the time.