Elder visit day
Today was the most emotional day this week that I had experienced. It was elder visit day. I waited patiently before it was my turn to meet an elder. The elder I visited was a woman with a sister that looked around her age. Both were the sweetest things; sweeter than honey. One of the most moving things I witnessed during the visit was when the elder we visited asked if her sister could get the same treatment. The thing was that her sister wasn't part of the Healing Haiti elder visit. But we did, and I just saw the gratefulness in both of them. Near the end we prayed for them. I held the elder we were mainly visiting's hands. She asked me my name and then told me 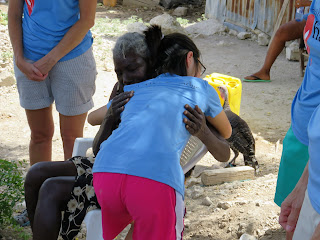 hers. As we began to pray, I could hear her whispering words that I couldn't understand. This was where I started crying a little. I realized how much these elders, the Haitians in general meant to me. How much this woman and her sister had been through. I remembered that I hugged her, then hugged her sister, then hugged her again. I cried as I gave those hugs. Before we left, even before we prayed, I remember the woman stating she and her sister would pray for us. 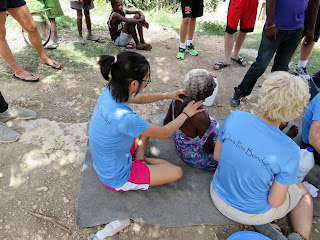 Today was another emotional day serving here in Haiti.  It was amazing to see what is happening at Grace Village with God's guidance.  From the description from those that have been here before, the transformation continues to be incredible.  The kids in Grace Village were similar to all the others we have encountered thus far in Haiti in that their first and foremost need is your attention and just for you to love on them as human beings.  They pull at you and hug you in throngs.  The smiles on their faces are priceless and have nothing to do with what they own or have in their possession.  It is truly amazing. I had two girls on my lap in giggles as I bounced them on my knees. Such simple entertainment.

After our visit to Grace Village, we did several elder visits.  Since we are a relatively large number, we broke up into three groups so that it wasn't an overwhelming number of people crowding into their small "homes".  I was in the second group visiting an older man named Lindor and it was truly an awesome visit. His face lit up upon our arrival and he allowed us to wash his feet and rub lotion on his feet and hands.  Then we sang a couple songs to which he wanted us to sing louder in our praising God.  He was such a life filled man that I couldn't keep the smile off of my face. Although we were there to benefit him, I walked away just as filled as him, if not more!
~Dawn 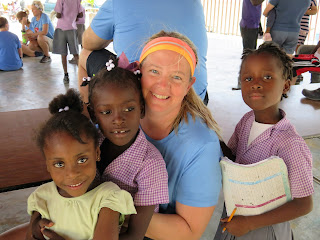