Today we continued the chaos at sports camp. We started with some skits, testimonies, and then jumped into the games. We had basketball, a variation of ultimate football, and some floor hockey. Although we had a plan for how things were supposed to go, they once again went in all directions, but the kids all had a blast and that was the goal! We had a little intermisson with yet another skit, and a snack. At the end of the day we pulled out the speaker, had some worship time, and then had a big dance party. The whip and nae nae was a big hit. 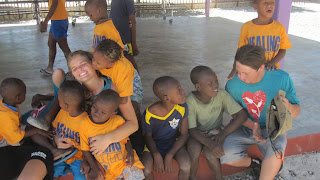 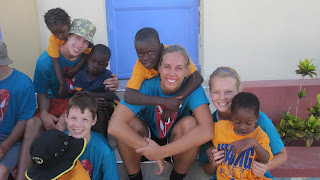 We then headed off to a new family's organization, named SportsDisciple. We were able to hear their absolutely amazing testimony about how their family picked up everything and moved to Haiti to start a sports program where kids can play soccer, get a meal, do community work, and all learn about the Lord. Just three mere years later they already have 1300 neighboorhood kids registered and over 45 locals full-time employed. After that we went to the mass grave where all the victims of the Haiti earthquake in 2010 were buried. We got to hear the stories of what people went through and see the beautiful new memorial that has just recently been built to honor the 300,000-400,000 who lost their lives.


Finally, we headed to Rebuild Globally, which is a business where they make sandals, school shoes, purses, and wallets with the sole made only out of tires, and the rest made purely out of non-imported recyclables. The lady who started it was called by God and sold everything she had and came down to Haiti with 7000 thousands dollars. Now she has a successful business that has partnered with Nike, Kenneth Cole, and Billabong and is also employee locals and supports the clean up efforts in the county. It was quite a tiring day to say the least, but we were all truly inspired by the stories we heard and the things we saw. Can't wait for a great last few days!
-Kate Brabenec

Posted by Healing Haiti Mission Team at 8:24 PM No comments: