Our day started by elder visits at Hope Church - we washed feet, served them lunch, sang songs and prayed with them. We then went to Croation Orphanage {please read Lydia's contribution below about her special experience there), followed by another orphanage called "Dios" where kids with special needs have a place to live and feel loved. Our trip is coming to an end soon and we all agree that the week has flown by. Our words of the day were:


Today at Croation orphanage, we began by sharing the names of the team and the 40+ kids that live there. One of the kids, Max, who is six years old caught my attention when he hesitated to stand and share his name. I knew at that very moment he was one I was called to pursue. As our team began playing with the children, I intentionally kept my eye on Max. With not a hint of doubt in my mind, I decided to go over to him. I called, "Max!" and his response was to immediately walk away from the group and me. It was about five times that I repeated this process, and each time there was no sign of Max letting his walls down.
As I began to get desperate, I stood by him and watched as he got water to drink. I followed and paused when he went into a building, but kept my eyes on the doorway for when he came out. Let me tell you, I have never had such a hard time making a friend! :) Soon enough, he poked his head out to see if I was still there... And once again, I smiled and said, "Max!" Once again I motioned for him to come and hang out with me. To my surprise, he walked towards me... but he continued to walk, and soon he had walked right past me. By now he should have gotten the drift that I would continue to follow him until the point of acknowledgement.
I sat down close to him, and two kids began painting my nails. I sat and watched Max with high hopes that he would finally come by me. As he slowly turned his head to see if was still looking, I smiled. When our eyes met, I once again said, "Max" and he came over to sit on the chair next to me.
I could tell Max was fighting what seemed to be the belief that he was not worthy of being loved and seen as equally as the other children. It became evident to me that the other kids did not especially like Max and did not want to include him in the fun that they were having. He began helping the girls paint my nails but they tried to tell him that he could not help and tried removing the nails he was painting because they were "ugly." I did my best to teach them to share and demonstrate that Max has equal opportunity and the right to be a part of this moment. I tried to teach the girls that this was Max's work of art and that it matters to me.
All too soon... It was time to leave. I was unsure of how Max would respond because he hadn't smiled or talked during our time, but he had stayed close to me. When I told him, "orevwa" ("goodbye"), he had the piercing look that you never want to witness and walked away by himself... so I followed. I called his name one last time and ran up to give him a big hug. I communicated, "I love you" to him because those were the last words I wanted him to hear, not "goodbye." As I walked away, I heard a quiet voice call, "bye" in English and turned to see him wave before turning back to the building. He had the sweetest look in that moment.
These moments are what give life. Max was fighting to accept love and needed to be pursued. All of the voices of the children telling him he wasn't good enough or wanted simply didn't matter. The truth Jesus says about him triumphs over any lie. The awkward pursuit after Max was worth his heart for a few short moments. A pursuit like Jesus pursues is always worth while and can happen any day, not just in Haiti. 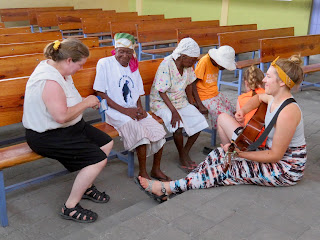 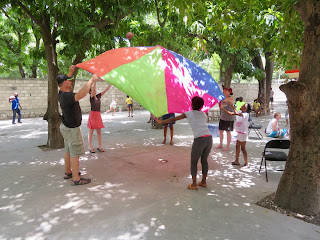 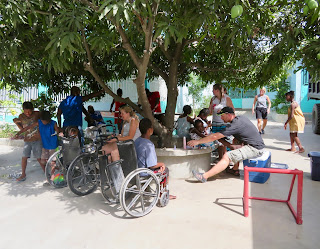