(Kristi) As we approach the last days of our trip to Haiti, evening conversation has turned toward discussions around what we are being called to do - not just here, but at home too.  We've been blessed by each other in so many ways, encouraging one another when we were down and reveling in the beauty of watching each other shine Jesus' light brightly in this world using our own God-given gifts.  We have witnessed the beauty of living in community and of the support and strength that it brings.

Today we met a couple at the Haiti Deaf Academy, Meredith and Keith, who listened carefully to God's call. God had planted an ember in Meredith's heart early in her career,  which turned into a flame after a recent visit to Haiti. This led to them serving as missionary directors, using their unique gifts to teach sign language to 50 children ages 5 - 15.  In their current role, they provide loving care and housing for the children until the summer, when the children return to their families.  Although there was not one, but two language barriers for us today (both Creole and sign), we found that our common language of play bridged the communication gap.  We prepared lunch, prayed, played, shared Bible stories, sang, did crafts and filled the play yard with a melee of fun... like a couple of kids using Greg's face and head as a human canvas.

(Deb) One little boy who stole my heart was Fritz, a five year old who had moved to the Haiti Deaf Academy in September with no language skills whatsoever.  Fritz cuddled right into my lap for story time and giggled joyfully while Pastor "Hurricane" Gary sprayed the kids with water.  He drew a chalk picture for me of the tap-tap that we had arrived in and ventured off to a game of basketball with Bill as the human hoop - so he made EVERY basket.  When it was time for us to leave, he wrapped his arms around my neck, squeezed me tight, and started to cry softly.  Fritz will forever be in my heart. 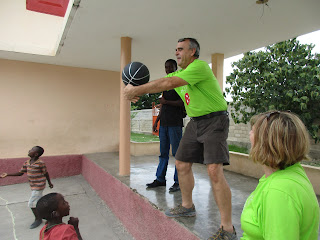 (Becky) I met Choisenie, a blue-eyed deaf girl from Cite Soleil. When she arrived at the academy two years ago, she had no language. She was originally believed to be developmentally delayed, but was instead found to be deaf. She approached me right away to show me that our eyes matched, and together we searched for blue items to reinforce our shared eye color. After a few hours of play, including four-square (which I had to re-learn and then teach to Choisenie), we together selected a bracelet for me to purchase in the modest gift shop which was made by residents of a nearby deaf community. I will never forget this precious girl's beautiful face, her eyes, and our time together.

(Jennie) Today, I met Noahy.  He is the only student at the academy that is truly an orphan. He was loving from the beginning.  He followed me around, helped out with passing out of the sidewalk chalk, and especially enjoyed the face painting.  He gave me a beautiful new "Groucho Marx" look. We had a long Minnesota good-bye, with hugs and tears by both of us, waving the "I love you" sign through the gates.

Posted by Healing Haiti Mission Team at 8:25 PM No comments:

It was a day to rise early.  We were up before the crack of dawn to be at a church service that started at 6 am.  The team attended Church on the Rock, which has several differences from Incarnation both architecturally and what happens during the service.  The church building has no doors.  It is a large single room roughly the size of our sanctuary and Grace Hall put together.  This room has a balcony as well.  When we arrived we were greeted by music and preaching, not because we were late, but because the “warm up act” was already underway.  With loudspeaker cabinets half the size of a semi-trailer and the watts to bring them to life, worship at Church on the Rock is LOUD.  What we missed in translation we gained in volume.

There were about 300 people at the service, and about 50 of them were seated.  The majority were on their feet walking up and down the aisles, between the rows and even outside the church engaged in prayer, listening to the words and music coming from the stage.  They worship in a much more animated way than the typical service at Incarnation (OK, any service at Incarnation).  These are people who come to church before going to work, or going on with the rest of their day.   It was interesting to see how other people conduct their worship, and humbling to see how many people make daily worship a part of their regular lives

After the service we enjoyed a walk back to the guesthouse on the neighborhood streets.  It was much more active than when we rode to the church on the tap-tap.  Many people (most?) walk to their daily destinations of work or school.

Our first service opportunity was at No Place Like Home orphanage.  We presented the Bible story of Jesus calling his disciples where they were out in a boat, and while Jesus was sleeping a storm comes up that rocks the boat and it drenches the boat’s passengers.  But Jesus wakes and calms the storm.  In our presentation of the story, the tempest was brilliantly played by Pastor Gary Medin, with a squirt bottle.  The story was brought to life by our interpreter, Valery, and the kids loved it.  The Activities team put together other fun stuff for the kids as well.  We had soccer balls, plus arts and crafts and sidewalk chalk to leave with them to play with after we had gone on our way.  We also sang several songs with them, and in return, the kids sang a song for use in Creole.

Our second service stop of the day was at Mephibosheth Orphanage for special needs children.  We did the same Bible story including a repeat performance by hurricane Gary, and sang some with them as well.  But there were also some differences.  We had more time to spend with this group of kids and we had balloons to blow up for them, face paints, and bubble soap.  So we had a great opportunity to play with the kids, and be kids ourselves.  We were treated to 2 songs by a young  lady who lives at Mephibosheth who sang like an angel.

We ended the day with thought-provoking devotions, sharing what we as individuals have learned from Haiti and how we hope to bring a part of Haiti home with us.  It is clear that what we’ve seen and done in Haiti is messing with our hearts, bodies, minds  and spirit.

It was a great day for the team here in Haiti.  We got several chances to learn more about the culture and daily lives of Haitians, and to serve more of God’s children.  The weather is typically blazing sun and plenty hot (for Minnesotans), but we’ve been blessed with overcast and cooler weather that has been very easy to tolerate. Except for the occasional rain squalls caused by hurricane Gary.

Posted by Healing Haiti Mission Team at 4:28 AM No comments: