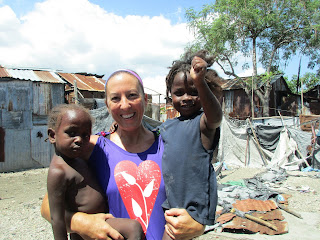 Where to start.... Today was our water truck day where we delivered water into 3 different "Blocks" (neighborhoods as we call them) in Cité Soleil.  Cité Soleil just to give you an image to think about is the poorest city in the entire Western Hemisphere, and the second poorest city in the entire world.  We stopped at the water station to follow our freshly filled truck into our first block (many gallons of water) - Stop 17.  Stop 17 was absolutely unbelievable as we pulled up and parked our tap tap off to the side.  It was nothing less than what I have seen on a National Geographic TV show.  The line had already formed with people anxiously waiting with their buckets in hand.  The children seemed to come from all directions, their naked bodies jumping at you and begging with their pleading eyes to be held and loved.  They craved our attention and were not willing to share our bodies or even a hand with any other child around.  The couple children you picked up smacked and kicked the others away who were anxiously waiting for a turn to be held.  With the commotion of the children hanging on tightly to any piece of you they could, we got the truck hose connected and began pumping fresh water into the buckets.  As some of us helped hold the hose, others aimed the end into buckets and quickly moved them along as to not waste any spilling onto the ground.  Water is such a precious commodity to them, wasting is not an option.  I was expecting to grab the hose and help aim when I felt a tug on my shorts.  I turned to see a beautiful girl, no more than 2 years old, staring with no expression into my eyes.  Naked as can be, distended belly, harsh looking little feet and hands, my heart instantly melted.  I picked her up and hugged her so tight, telling her how precious and loved she is.  She wrapped her tiny arms around my neck and just starred at every aspect of my face.  Not a single expression on her beautiful face.  I spent my time filling water buckets, holding the hose, helping walk water buckets to people's homes.... All the while this silent child sat clung onto my hip.  I asked a woman holding a different child (with our interpreter near), if this was also her child?  She spoke something in Creole, and gestured with her hand as if "shooing away."  Our interpreter informed me that this child was homeless and had no parents as all.  The woman pointed to a metal overhang as we passed by carrying her water that this child lived under that overhang alone.  I was in shock beyond belief and immediately asked who feeds her?  The woman shared different people throw (was her hand gesture) food to her when they have some.  She could not take her in since she could barely feed her own 4 children and was expecting another any day now.  I stayed holding that child right up until I had to put her down and go.
We walked up the hill and had the privilege of seeing and touring Hope Church!! I was so excited to be able to see this, since I had learned so much about this magnificent place!  12 feet of garbage cleaned away and 40 feet of ground had to be drilled to place the foundation for this beautiful church.  The church opened its doors February 2016, and will be ready this September 2016 for a school within the church.
We headed back to the water station between each stop to refill the truck.
The other two "blocks" we delivered water to were stop 22 and 26.  Just like the first, we held kids, aimed the hose, carried buckets, and provided these places with fresh water.  Each stop got a bit more chaotic, and impatient people many with aggression started to come out.  The third stop was the poorest and most dangerous location we had.  We stuck together as a team, and along with our wonderful bodyguards :) we all came out with a much different perspective on life and what something as simple as water can create (uproar to say the least).
I am in complete awe that people actually live in places like Cité Soleil, but they are smiling, playing in the water, and living the most normal life they can and the only life they know.  I cannot wait to see what tomorrow brings this wonderful team of mom's and daughters :)
~ Lisa Leibke 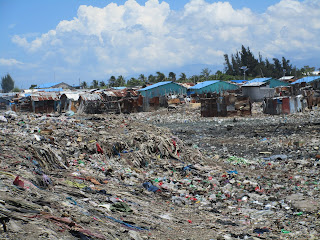 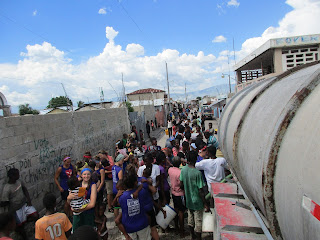 Posted by Healing Haiti Mission Team at 8:51 PM No comments: 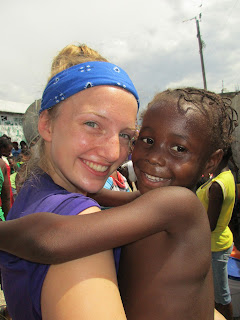 Today was Day 3 of serving: Water Truck Day! This morning, our entire team boarded the tap tap and followed a truck full of up to 10,000 gallons of water into City Soleil. We made three different stops on the streets. At each one, all of the kids would come running at the tap tap and surround it before we even stopped. Some were clothed and some were naked. Lots of them had bloated bellies, and some had red hair, both of which are signs of malnourishment. The one thing that was the same about each and every kid that I saw as we drove up  was their expressions of pure joy. As we got out of the tap tap, they crowded us with their hands up, some even fighting over us, wanting to be held and loved. While we were getting out, people of all ages, from little kids to elders, lined up behind the water truck with buckets waiting to be filled. It was overwhelming yet incredible to be amongst all of the kids who were constantly grabbing at you for attention and people aggressively racing into the line, all shouting in Creole. It was chaos that so clearly revealed to me what joy really looks like. Not the joy you get from buying new things or winning a big game or holidays. These people had a much stronger and truer joy than that, one that comes from having a basic need like water fulfilled when you've been deprived of it. One that comes from having someone simply hold you because you don't get that love and affection from your family. Despite having nothing, these people offered so much love. An eleven year old boy came up to me with his little three year old brother and points to him, then tells me "porte". In English, it means to carry. He wanted me to hold and love his brother instead of himself. I picked up his brother and both of them smiled so big, and the eleven year old said "chante". This is where my two years of high school French came in handy and I was able to translate that to "sing". The night before, we had learned a song in Creole that goes "Glwa Pou Bondye Pou Tou Jou", meaning "Glory to God Forever". When I started to sing it for him, he and a couple other boys nearby join in, and we together we stood in the middle of the poorest slum in the western hemisphere singing "Glory to God forever". These children have nothing but God, and they worship Him and praise Him because He is their hope. This moment just really stuck with me, and I still can't get it out of my head. These kids worship God when they have nothing, and sometimes it seems like I'm too busy with the things that God has blessed me with to even stop and thank him for it. The people in City Soleil are such an inspiration for me, because they are full of joy and praise for God when they are some of the poorest people in the whole world. At the end of the day, I felt like they showed me more love than I could've ever shown them. They would come up to me and jump on me, braiding my flyaway hairs and teaching me how to play clapping games, then singing to me and giggling over my bright white skin. In the limits that such extreme poverty put on them, they were giving me everything - their gifts, their talents, their time, and their love. They showed me what pure joy and love looks like and inspired me with it. The poverty is ugly and unfair and these people don't deserve it, yet God is using it to teach me more about Him. He is showing me His love in these people, and I feel so honored and humbled because of it.
Posted by Healing Haiti Mission Team at 8:04 PM 6 comments: