A Day to Remember

Today started out as usual. We would slowly one by one come out of our bedrooms and join in our morning conversations until breakfast was ready. Our day's plan was to go to Leveque to meet some deaf residents that are in need in the community on our prayer walk.

After our devotion and prayer we ate our breakfast and embarked for our trip. There was some concern about making the crossing near the fallen bridge as it was about 2 feet under water.  We approached very heavy traffic as trucks, buses, Tap Taps, motorcycles, and SUVs fought to get in line to reach the flooded crossing. There was a lot of people milling about watching and also directing traffic.  When it was our turn, there was trepidation as the other team had some trouble making the crossing yesterday when their tap tap stalled out just a few feet from reaching the other side, but luckily they were able to get out eventually.  Our driver, Max, started the crossing and it went well until we got about 10 feet from the other side when the engine stalled. He tried to restart it several times with no avail. Several men started coming towards us and we became a little nervous of what their possible intentions were as we were helplessly stuck in the water.  In the Tap Tap, we all prayed for safety for ourselves and for the people around us.  As it turns out, they were simply being kind and trying to be helpful and worked to help Max get the truck started for several minutes. When that failed, several men got behind the Tap Tap to push it forward a few feet. We were amazed they could get it moving with our team still inside! Then an ambulance SUV got behind us and was able to push us out of the water onto the dry land.  Unfortunately, the engine and the muffler were full of water.  Several Haitian people came and helped push the Tap Tap back and forth trying to flush out the water.  A Mack truck pushed us to a different area out of the way of the busy traffic.  While waiting for the Tap Tap to be fixed, we were overjoyed to be reunited with both deaf girl and boy on their way to Haiti Deaf Academy (HDA).  One of our team members said "We were stuck, but God gave us 'Hope.'" This helped us put our experience in perspective.

We all stayed near the Tap Tap while waiting for the guys to attempt to fix the vehicle and talked with both kids, and their mothers.  At that point, we abandoned our plan for the day and focused on getting back to the guesthouse.  Some of the Healing Haiti staff from the guesthouse came to the rescue and got us home safely.

After a delicious spaghetti dinner prepared by our staff, we had our nightly devotion.  The main focus was on trusting God and having faith in God as He kept us all safe.   Many of us shared our experiences and word of the day.  Some of those words included patience, chaos, teamwork, trust, adventure, blessed, reason, and Hope.

Joshua 1:9 - Have I not commanded you? Be strong and courageous.  Do not be afraid; do not be discouraged, for the Lord your God will be with you wherever you go." 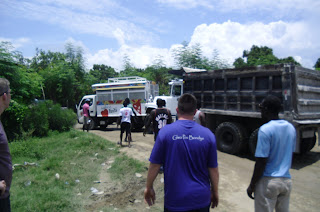 Posted by Healing Haiti Mission Team at 8:54 PM No comments: