Sunday ... our last day together as a team in Haiti. We began with our breakfast 10 minutes earlier so we could arrive at Grace Church for worship service. Once there, the songs were familiar and the music was soothing for our souls. As we left the families of Grace Village, we gave our last hugs to those we had met earlier in the week. We drove along the shoreline of the Caribbean in our tap-tap. The mountains were a deep green full of vegetation. We were definitely out of the city limits. Litter on the streets slowly diminished and the thickness of smoke haze lessened.

We arrived at our final destination at Wahoo Bay Beach Resort for a day to relax and unwind before the long journey home. It was a side of Haiti we had not seen all week. We were hesitant about spending time at the beach as we felt that we should still be doing mission work, but also at ease about contributing to their economy for workers to provide for their families. The day consisted of live King Crab cooked to perfection after choosing the crab of your choice fresh from the sea. We enjoyed fresh chopped coconuts so we could enjoy the coconut water and flesh within them.

Along with the great food, we were entertained with a wooden painted boat that nine of us climbed onto as the boat captain then paddled us with his own strength through the choppy waters. After paddling for 20 plus minutes, he anchored at our destination where we jumped in and began to snorkel in the coral reef where we saw a variety of coral, eels, squids, sea urchins and bright colorful fish. We then rented jet skis, and played chicken on the water trampoline. On our way back to the guest house, the smell of burning garbage along the streets became thicker in the air as we approached the city. We watched as children and parents pumped water at wells and took baths along the side of the road.

We had our final dinner with our team and rather than word of the day, we did word of the week. Everyone seemed to agree that they have been filled up and that the experiences of the week will have a ripple effect on those around us. This trip has been an amazing week filled with love and heartbreak.  We are all leaving forever changed with the faces of Haiti etched into our minds. 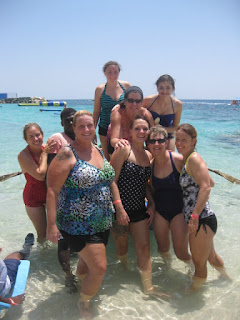 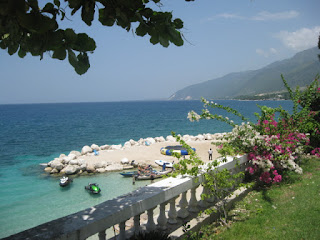 Posted by Healing Haiti Mission Team at 9:28 PM No comments: