Hey hey party people, we are wrapping up day 3 and boy, has today been an emotional rollercoaster. We began the day with a church service. It was unlike anything we have ever seen, and we didn't understand a word they were all saying. But watching the Haitians walk around the church and sing as loud as they could, seeing the emotions on their faces, you could feel the feeling they felt and related to it. The Haitians faith was visible, and gave us a better look on how much God means the the people of Haiti. 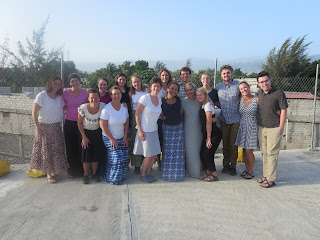 Next the team split into two groups, one group went to the Home for Sick and Dying Babies and the other went to Daries home for children with special needs. At the home for the Sick and dying babies we were greeted by children with smiling faces, eating mangoes, their one snack of the day. We had the opportunity to go outside and play with them on the playground and then some of their parents arrived for visiting hours. It was amazing to see overjoyed children as their families were brought together but also heartbreaking to see those with their hopes up who felt let down with no visitors. We continued into a room filled with rows of cribs filled with babies that we helped care for. Holding their fragile and sometimes very sick bodies was a very hard experience but also revealed the healing powers that love can provide. Their love for us and just to be touched was very evident. They would reach out and touch our cheeks and stare into our eyes, they would hug you endlessly and hold on to us as tight as they could. It was a life-changing and challenging experience.

Those of us who went to Daries walked into the orphanage not knowing what to expect and surely many of us were caught of guard at the level of need for love the kids were at. It was quickly known that the lack of supplies and tools is their biggest struggle. Giving all that we brought, we were soon left with only love to give. Picking up the children who needed it, we brought them outside to play with the bubbles, chalk, and other toys that we brought. It was amazing to see the smiles that instantly appeared on the kids faces as they felt the blow of the wind across their skin. As communication is limited physical touch is something that played a key role in showing these kids that they are loved. A simple tight squeeze or rub of the belly calmed the anxious shakes many of the children were experiencing. As the day carried on emotions grew deep. Not knowing when these kids will next get to go outside or feel the hug of a friend who loves them was tremendously hard to wrap our minds around. Tears flowed as we left, wishing we could do more. This experience was indescribably heartbreaking and empowering.

After doing all we could the two teams met back up to headed to our next stop. We went to the Parent Project and found a new sense of opportunity and hope that was difficult to see at our other two projects. The Parent Project works to create jobs for mothers and fathers giving them fair wages and the ability to keep families together. It was amazing to see the drive that the workers had and the hope that the Parent Project provided them with.


- Posted using BlogPress from my iPad