What is up everybody, how is everyone doing?  Me, I’m doing great this has been such an awesome week I am so happy I have come back.  Today we split up and 9 went to a hospital for the sick and dying babies and 4 of us went to Dare’s.  I went to Dare’s which is a home for disabled children, it was a lot like Gertrude’s in the fact that the kids were disabled but you could tell that it was a newer area by the fact that it was not as big and not as good of equipment, but the kids were a lot happier and compliant and they were so eager to learn English that I led a little session on the alphabet and taught them some words like, Hope Football.  Next we went to apparent project and bought little goodies and smoothies, the smoothies were so good.
Afterwards 4 of us were supposed to go to the wounded clinic, but there was no way for us to go so we four ended up helping babies instead.  That wasn’t my favorite thing but I did get to play with little kids which I love to do so in the end I had fun.  This has been such a fun trip and I have loved every minute I am so happy I came and yes I am safe and doing fine.  See you all soon later. 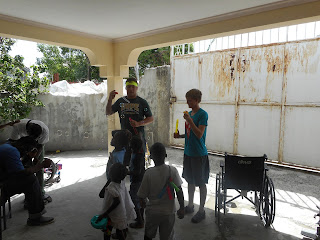 Hello! What a wonderful day. I had the opportunity to go to an orphanage for special needs children. Seeing kids smile, laugh and cuddle is never a bad time. It was a newer orphanage so they did not have a lot of amenities for the children but the workers were good with the kids and all of the children were happy and content. After Dare’s we went to the Apparent Project and got a tour of the grounds where everything is made. Then headed on down to another orphanage to finish off the day. Tomorrow is another exciting day!
Madi

Today I am humbled by the gratefulness of strangers. I am overwhelmed by the gratitude expressed for such a simple act. As I sat at the Hospital for Sick and Dying Babies holding a 16-month old boy, a Haitian man quietly walked up next to me and set his daughter down on the concrete floor by my feet. He said no words, but was sure to make eye contact with me as he stepped back to stand across the courtyard. He stood and watched us for about 10 minutes, until I motioned asking if this was his daughter. He shook his head to signify, “Yes.” A minute later I returned the baby I had been holding to another team member and motioned to the man asking through rudimentary movements if it would be ok for me to hold his daughter. He put his hands together in front of his heart and shook his head again, “Yes!” I held his daughter for the remainder of the parent visitor hours. In that time, the gentleman disappeared. However, I noticed a female standing in the same location he had retired to. She waved and smiled when I noticed her. I waved back and asked the same question of her through the same gestures, “Is this your daughter?” She nodded and placed one hand on her heart as if to say, “Yes. Thank You!” She stayed for a few moments, then gather her other children and left. The small child I was holding clung to my arms and eventually fell asleep there.
I set out to bless babies and their families today, but it was quite the opposite. It was their gentle appreciation, that which transcended oral expression, that pierced me…that pierced much deeper!
Jamie