After we toured through the amazing Grace Village and its whole campus, we had the chance to visit three elders in the Titanyen community. Healing Haiti has a program through which they support elders in the community surrounding Grace Village by delivering them hot meals, sending mission groups, like us, to visit them and serve them, and giving them check-ups through Grace Clinic whenever need be. Before we even started our day, our leaders explained to us that in Haiti, elders are orphans. They are orphans in the sense that in the Haitian community, they are not cared for by their children like older people usually are in the states, so they are mostly alone. The first elder that we visited today was named Lindor, a sweet man that used to be a dancer. On the tap-tap on the way to serve him, my leader asked who would volunteer to wash his feet. Without really even thinking, I said, "I will!". This was out of character for me because feet are not my favorite, so I was immediately nervous to wash someone else's feet. When we arrived at his home, he was so happy to see us, and the smile on his face was wonderful. His neighbor came over right when we got there, an elderly woman, and asked if she could also be served by us. I started to wash her feet, and when I was done with hers, I washed Lindor's. Having to wash two people's feet instead of only one as I was expecting, stretched me even further than I would have thought. This is how many other girls felt, as they washed feet later in the day or rubbed the elder's hands with lotion. But, at the end of the day, we were all so grateful that we had the chance to serve in that way because that kind of serving is exactly what Jesus speaks of in the Bible, so it was touching to carry out His will. After we served Lindor, we were able to visit Charlitude, a very nice woman that used to be a seamstress. We talked with her and worshipped with her as we served her. As we were singing one of our worship songs, her friend sitting nearby joined in, but sang the lyrics in Creole. Charlitude heard this and started singing in Creole too, so we all quieted down to listen to them. It was truly amazing to hear a woman that is almost 20 years past the life expectancy in Haiti to be praising God with such vivacity and joy. Lastly, we visited a blind elder named Meme. When we arrived, he was sitting on his cement floor in his hot, small house. But he was thrilled to see us and sat up right away, eager to be served. We worshipped with him and he began to sing the words along with us. Once again, that was such a blessing to hear. At each stop we made to the three elder's homes, we would ask them what they would like us to pray for, and each and every one of them said for their spiritual life or their children's spiritual lives. We were all in awe because they could have had us pray for them to have more to eat, more to drink, or a better home to live in, but that is what they chose. This really showed how much faith they had and how much they believe that God will always provide for them.
Next, we stopped to see the mass grave for the earthquake that struck Haiti on January 12th, 2010. It was so sad to hear the whole story of how about 300,000 people died and were buried right below where we were standing, which was very hard to think about. As we looked around the mass grave, we questioned why it did not look fully finished even though the earthquake happened six years ago. We then were told that it was not finished because of political turmoil, which put a pause on the work. That was hard to hear because this mass grave is so important to always remember the 300,000 people buried right below it.
Although the last part of our day was somewhat hard to swallow, we all had a wonderful day and really felt the Holy Spirit flowing through everyone we served. 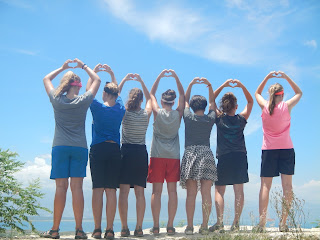 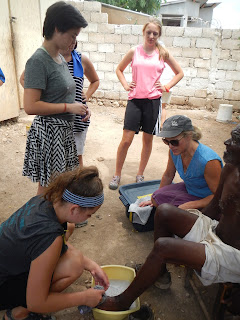 Posted by Healing Haiti Mission Team at 8:16 PM No comments: