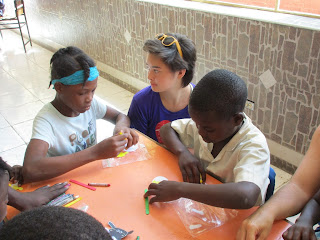 As we near the end of our trip, and our final day of serving, it is safe to say many friendships have been formed. Whether it's someone new in our group, an old friend brought closer, a mother daughter bond, or a Haitian friend made, friendship keeps that bond together that will never break. I've became much closer to some people I've known before, I've met new friends in our group, I've become closer to my own mother, and the other day I met a "best friend." He asked me if we were best friends forever, and of course I replied yes. This seemed to make the young boys day, which proves how powerful friendship is.

Today, we spent our morning at the LaLoo orphanage. Our visit was short and sweet. The immediate moment I entered, a young girl took my hand and brought me to a small table with few legos, but more than enough to keep them happy. She took apart what she and her friends had been making, and gave me full control of the legos. we built a small home out of legos together, until it was time to prepare for the craft. Before the craft started, we sang songs. I found a spot in the middle of a group of children, who quickly became attached to me. I received a lot of love from them. More than I could ever give. Sometimes giving love can feel better than receiving love. Eventually, we started the craft with a story that Breanne and Eva shared. While they read the story, one of the kids kept waving at me whenever we made eye contact. Right after they finished the story, and finished explaining the craft, the boy ran right up to me, and brought me to the table. He pulled up a chair for me and sat next to me during the craft, along with the girl who I built the legos with. Neither of them left my side until the very end. In the middle of the craft, they served the children milk. Few didn't finish, but seemed to have no problem once we got to the next craft and handed out the apple sauce.

Once we finished the craft, I took the two kids outside to blow bubbles. It started with just me blowing the bubbles, until the young girl began to lose interest and wanted to blow the bubbles herself. I was hesitant, but let her which was no mistake. She was a step ahead of me when it came to sharing with another child. She would notice that they wanted to try, and she would immediately hand the wand to them, which was very unique and unlike many other children I've met on this trip. While sharing, she seemed to have mastered the art of blowing bubbles and found ways to make large bubbles, small bubbles, and a numerous amount of bubbles. As we ended, I had many children hugging me. Once I got closer to the tap-tap, I had two left that wouldn't let go. The boy who brought the chair for me, and the girl who shared the bubbles. I had to have someone practically peel them off me, since they wouldn't let go. It was a painful but beautiful goodbye. 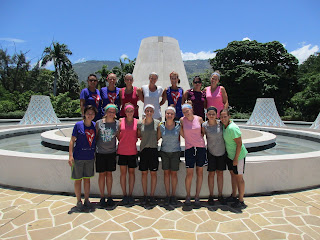 Next stop was the Museum of Haitian History - the Musee du Pantheon National Haitian or MUPANAH - in Port au Prince.  The heat was getting to us, so we were excited to get into the air conditioned building!  We entered from the top and went downstairs to the underground museum, which was pretty cool.  We had an excellent tour guide who took us back in time from the early days before Christopher Columbus to the present time here in Haiti.  There were 6 different rooms in this circular building, each of a different period of their tumultuous history.  After that we were treated to a special exhibition of art by famous Haitian artists.  More cool air for a while and beautiful works of art.  The girls were spellbound by one in particular that had bright colors and never ending stories behind it.  Then we were off to get back to the guest house for a quick snack as we had a soccer match to get to with the Delmas neighborhood boys!  We filled the tap tap with all of us plus these 15+  guys and we drove to the fields near the water station - huge fields that were open to the public.  After doing introductions, we split up into teams and I knew we'd get schooled but hoped they would let us have some competitive play for a while.  ;)  It wasn't all us vs them, so it was a good team setup.  The boys/young men were incredibly talented with fancy footwork and speed that blew me away (even with bare feet and flip flops for some!)  We had several moms and girls who put them to the test with their soccer skills as well.  It was over 100 degrees and everyone had a blast!  After the 2nd water break, we called it quits and took a few team pics by the goal.  Traffic was getting bad so we had to try to beat it as much as we could.  We felt so included in a tiny slice of their lives, and we hope they felt included as well in our short trip to their beloved Haiti.  We have learned so much from them and maybe, just maybe we can do this all again someday.  We made friends today.  Thank you, Delmas guys! 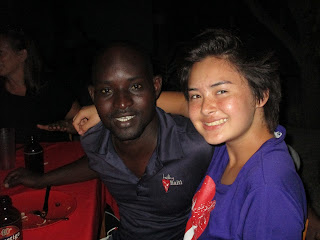 We finished our day with a special treat like home, but not quite. We wen't to a wonderful restaurant called Pizza Amour. Because the pizzas took so long, we played a game called Left Right Center. Because the game was made for a much smaller group of people we used friendship, and some knowledge we've learned from the Haitians this week. We used bottle caps as chips; instead of playing with 3 chips, we used two; and we paired up to play. Once the pizza came, we were all excited. We immediately dropped what we were doing and prepared ourselves for a slice of joy. We prayed, and began our meal. There was a large amount of selections. Chicken Alfredo, Veggie Pizza, BBQ Chicken, Cheese and more. The pizza was delicious and tasted wonderful. Once we finished, we played games, made music with our cups and glasses, danced, and took many pictures. I was lucky enough to be in charge of the camera that night and took advantage of it by capturing every single moment. We finished our night with a little story from the owner of how the place became a restaurant which was truly inspiring. We left full of pizza and energy, yet craving more and tired at the same time.

Posted by Healing Haiti Mission Team at 4:56 AM No comments: